Turquoise rarely forms automorphic crystals (crystals with visible and identifiable faces), it is usually found in the form of nodules, veins, fillings, etc. and in these forms, it is always opaque.

The colour is due to copper, turquoise is a hydrated copper phosphate with formula CuAl6(PO4)4(OH)8 · 4H2O. When iron impurities (Fe3+) replace the copper, the colour of turquoise turns green. When its crystals are automorphic, they are transparent and always very small in size (a few tens of micrometres).

They can be isolated but often form more or less spherical rosettes that can be grouped in clusters. Only a few deposits produce turquoise showing well-formed and transparent crystals, one of the best known is Lynch station in Virginia, USA (Figure 1); but there are also very fine samples at Cahai and Ottré in Belgium. 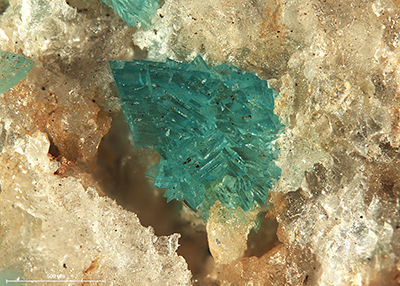 The micrographs (figure 2 and cover image) was made with a sample from the Échassière region in the Allier-Auvergne, France. This deposit, which is still being prospected, is also reputed to have produced very good quality specimens.

Want to see more micrographs? Follow us on social media!