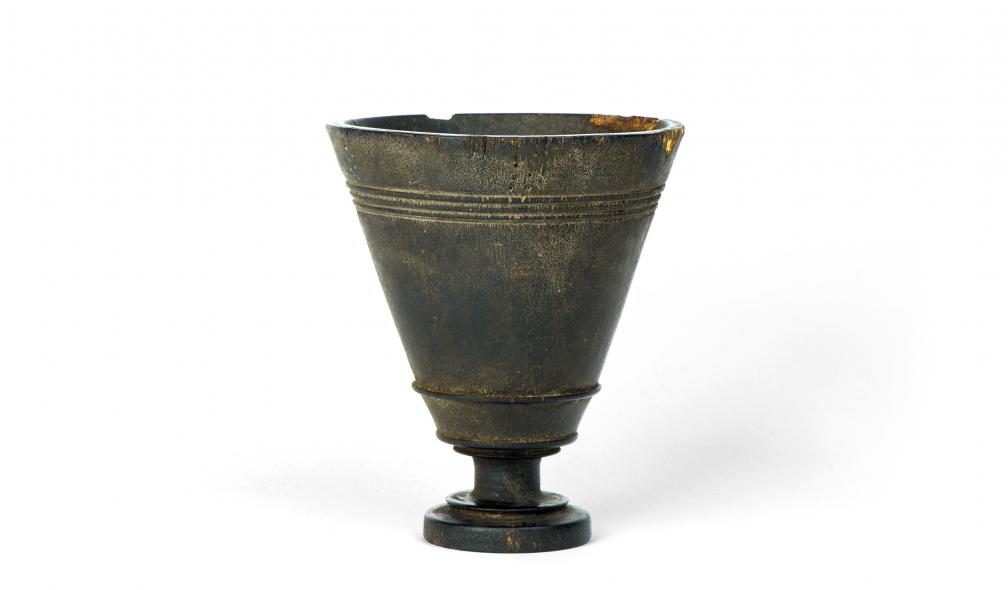 An Ethiopian cup in rhinoceros horn (1/2)

The position of GGTL Laboratories on the rhino horn trade is very clear. We condemn it.

Moreover, considering our last exchanges with the Swiss relevant authorities (veterinary services, customs, etc.), we decided that we will not carry on certifying rhino horns, including ancient object (as it is sometimes difficult to objectively establish its antiquity) in spite of the legal frame introduced by the CITES. 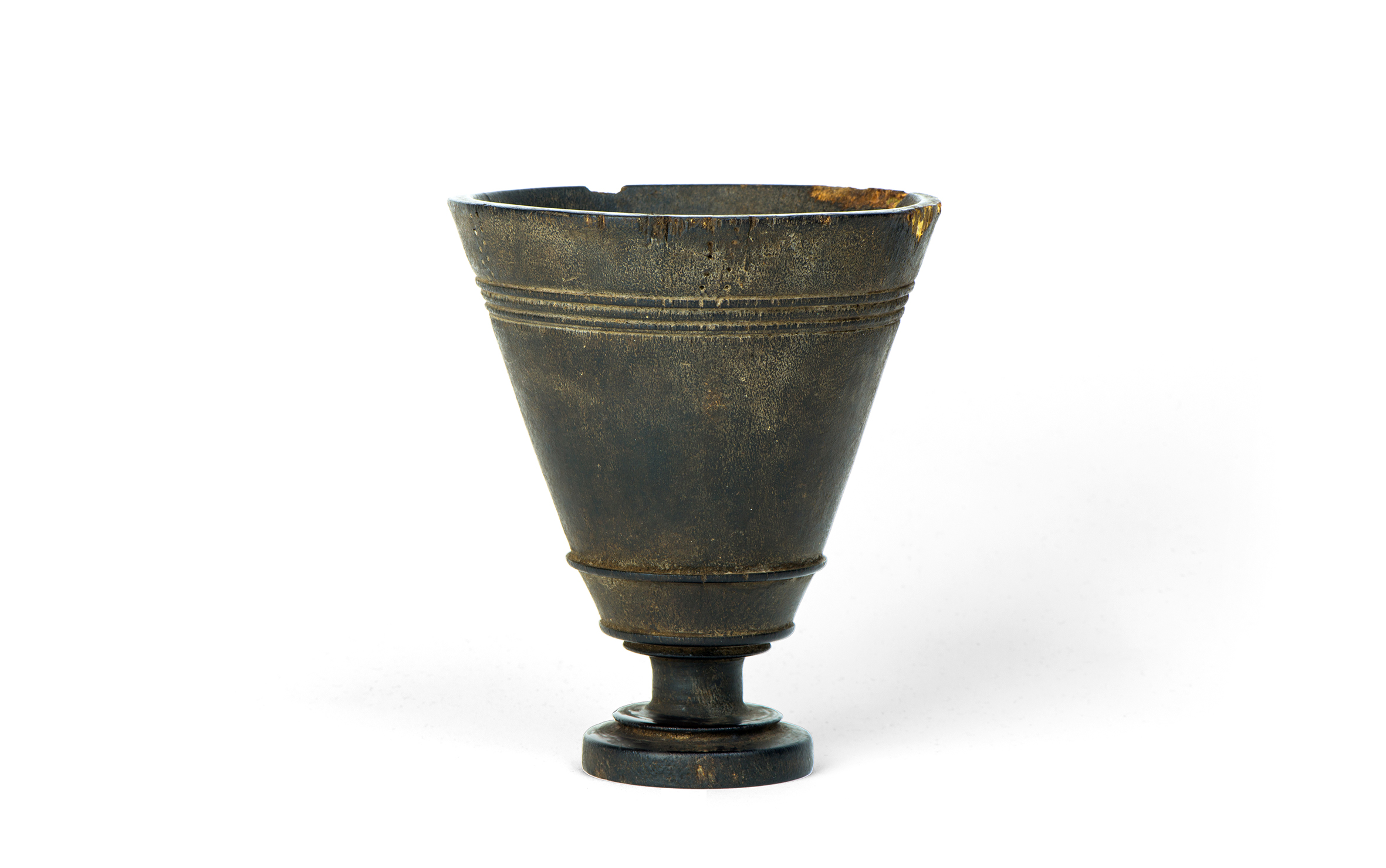 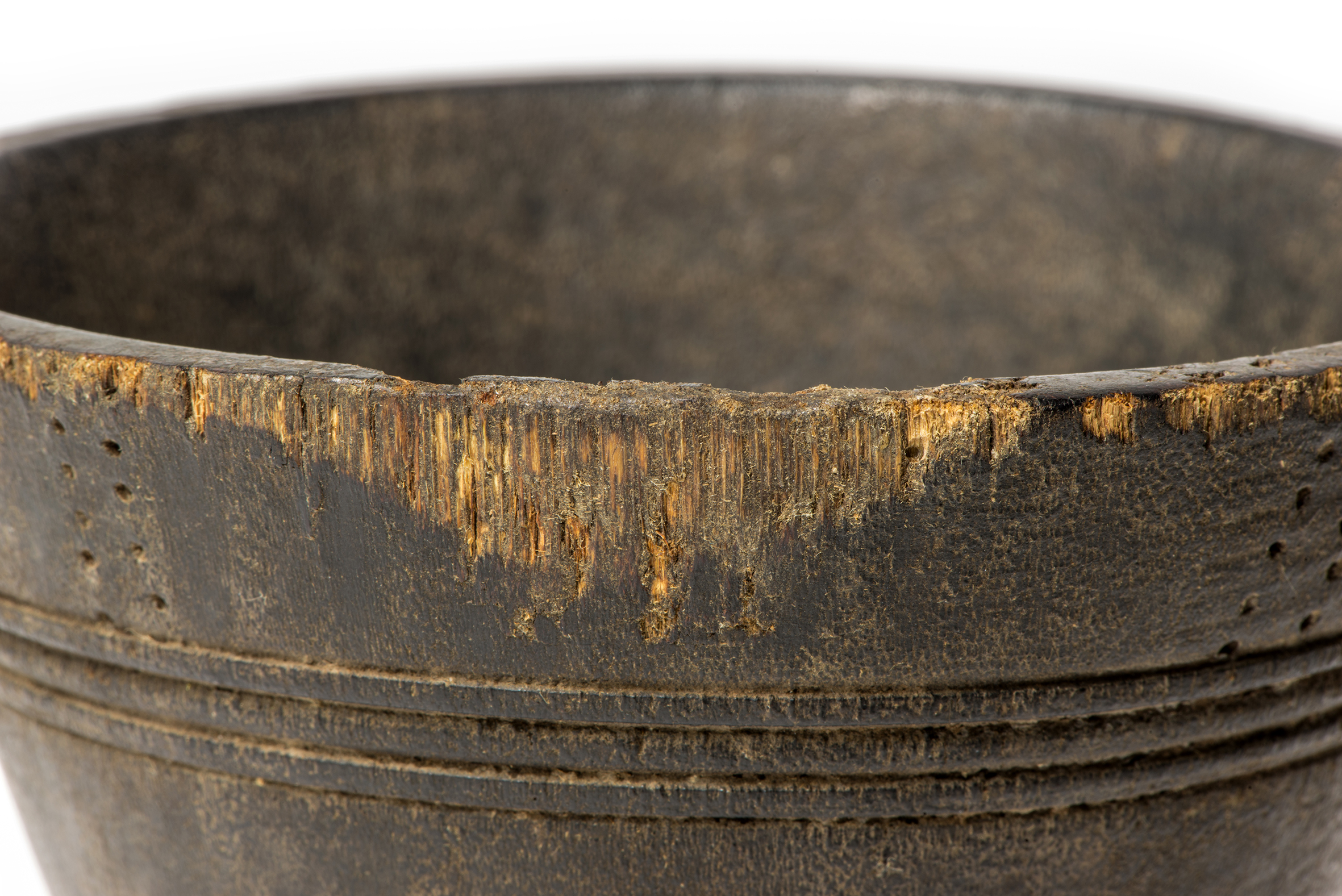 Figure 2: Abrasion damages on the external upper part of the cup showing the fibrous texture of the material. Photo E. Disner.

At first sight, the object seemed to be made of wood because of its mat, opaque and fibrous appearance (Fig. 2 and fig. 3). After a careful microscopic examination, it appeared to be made out of a rhino horn.
The article of Guindeuil (2014) allows us to establish a parallel between this object and other vessels produced for alcohol consumption in Christian Ethiopia. Indeed, this antique piece is dated from the second half of the 19th century with Ethiopia as a given origin. This kind of cup in the shape of a truncated cone is called wança (used as beer glassware) and its case is called käzäna. Its base might suggest one of a chalice but not its global shape.

If GGTL Laboratories has a certain experience in the certification of ancient Chinese rhinoceros horn cups, this is the first time we get a cup made in that material from that part of the world. 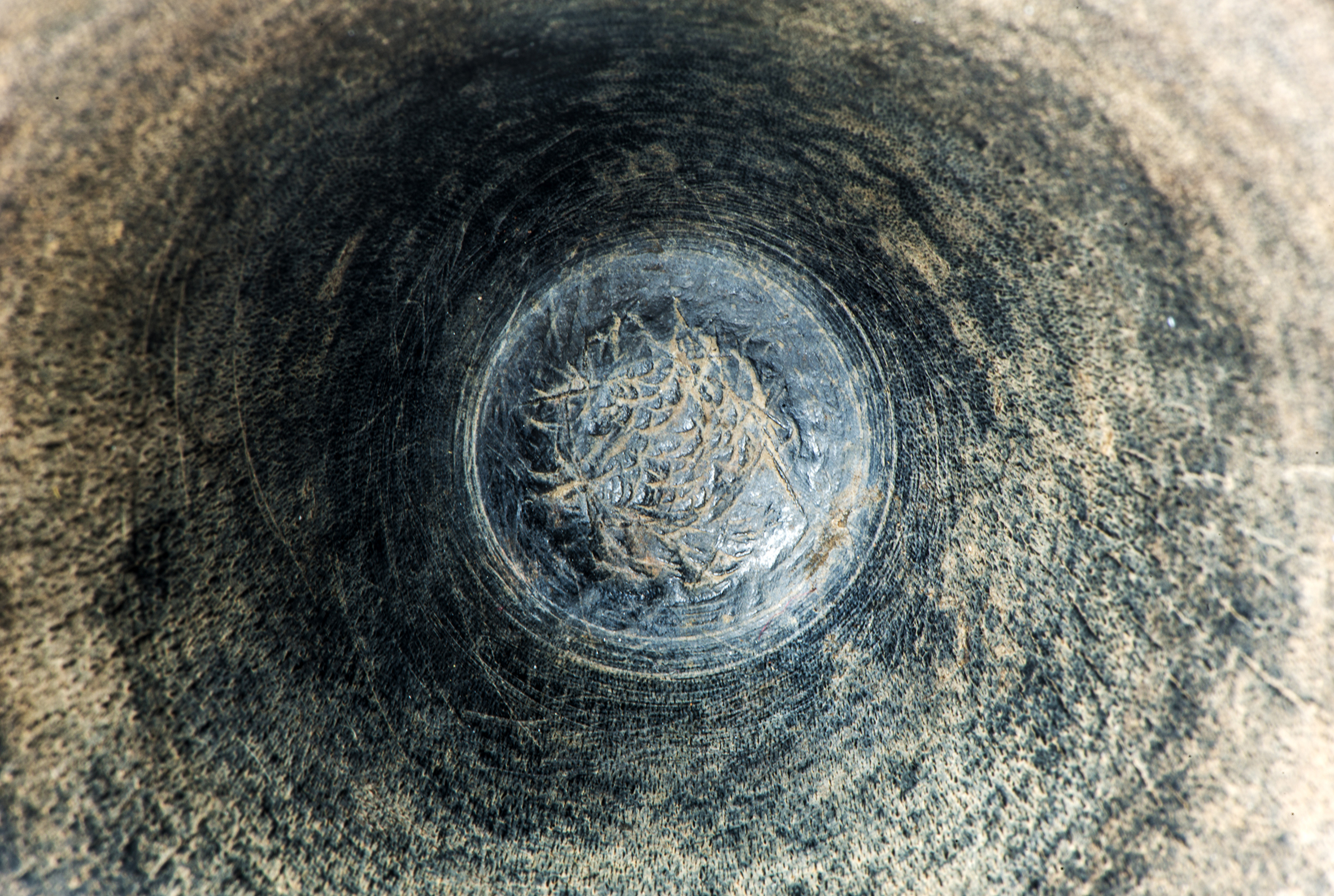 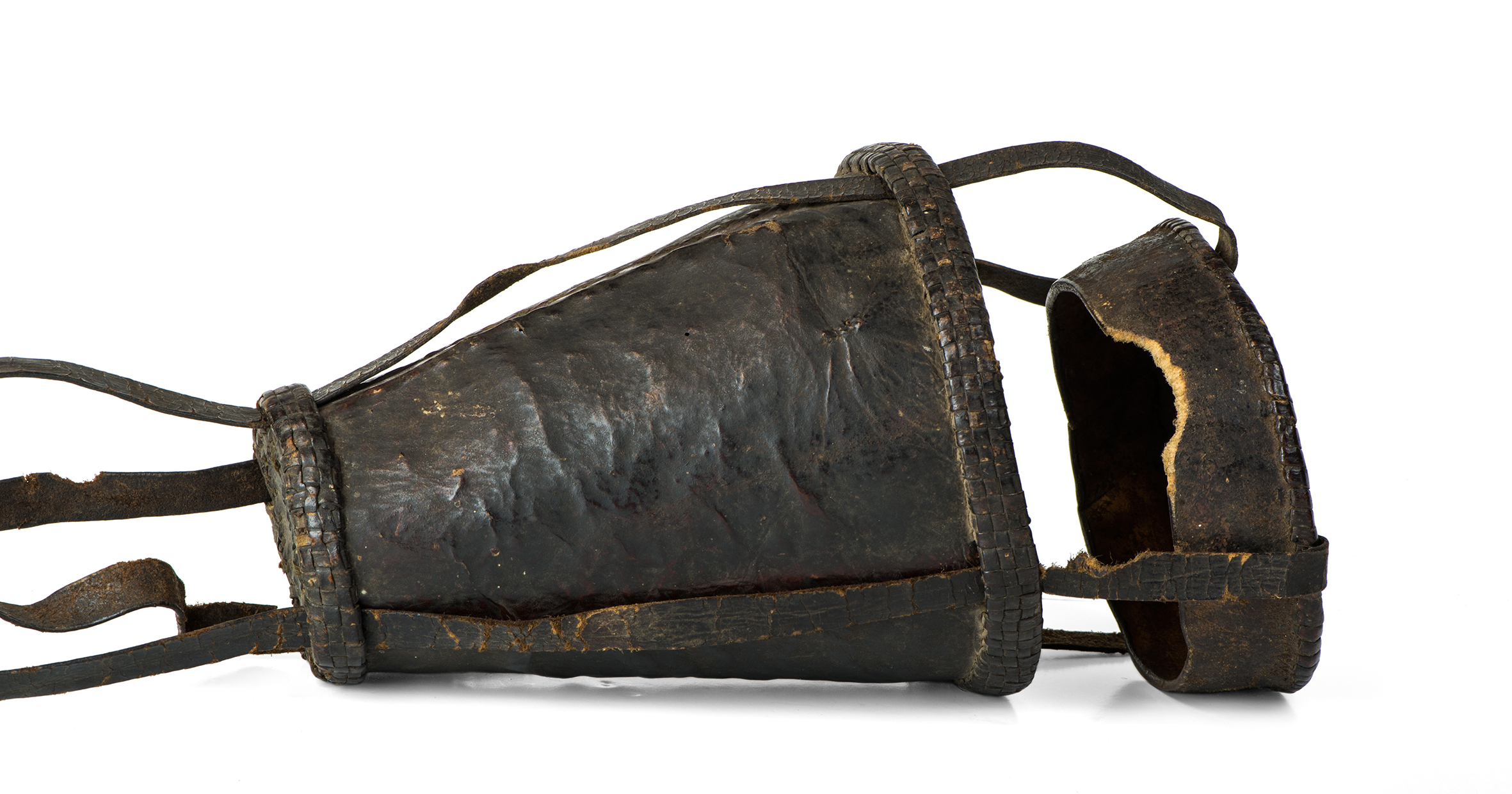 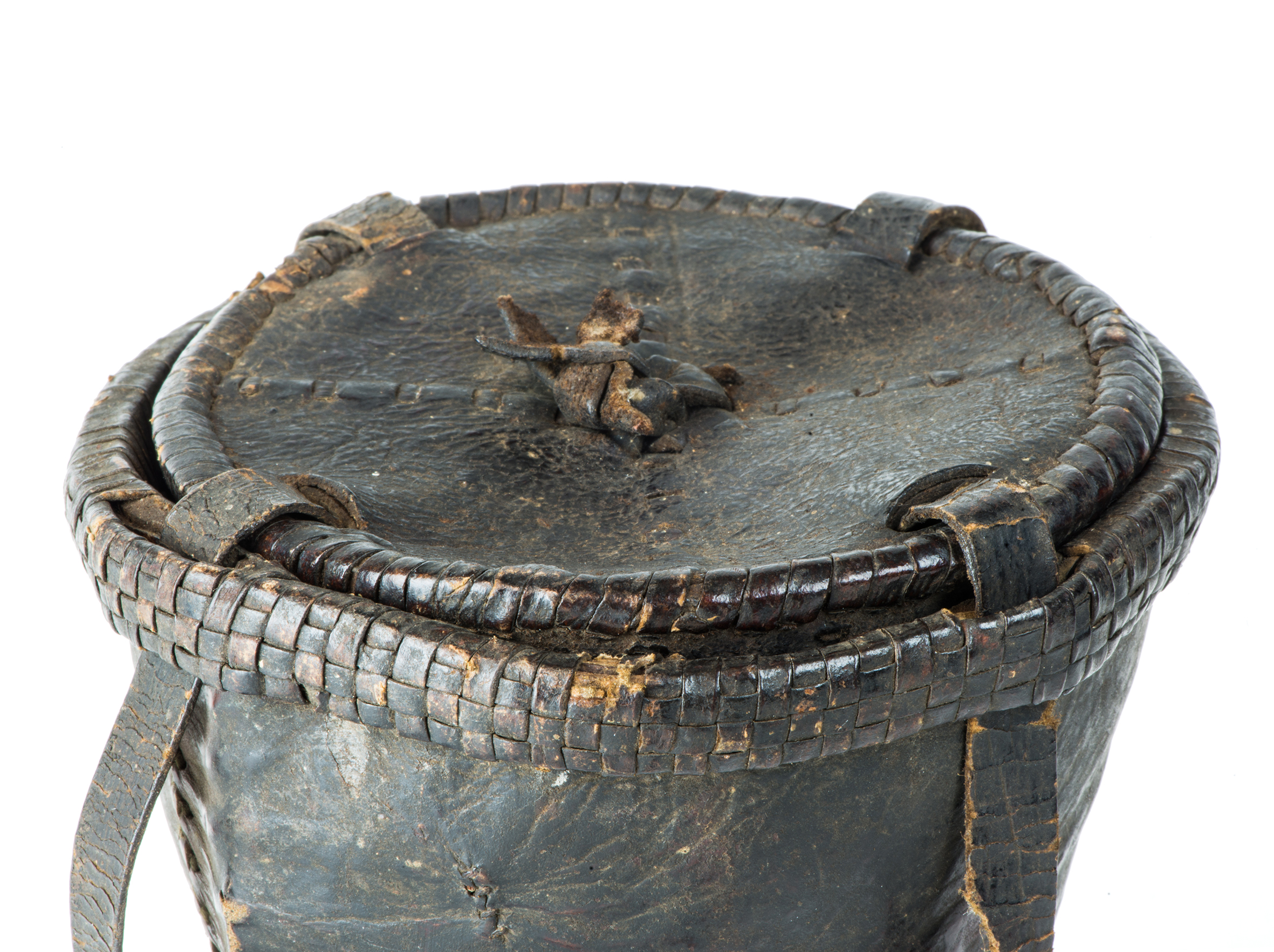 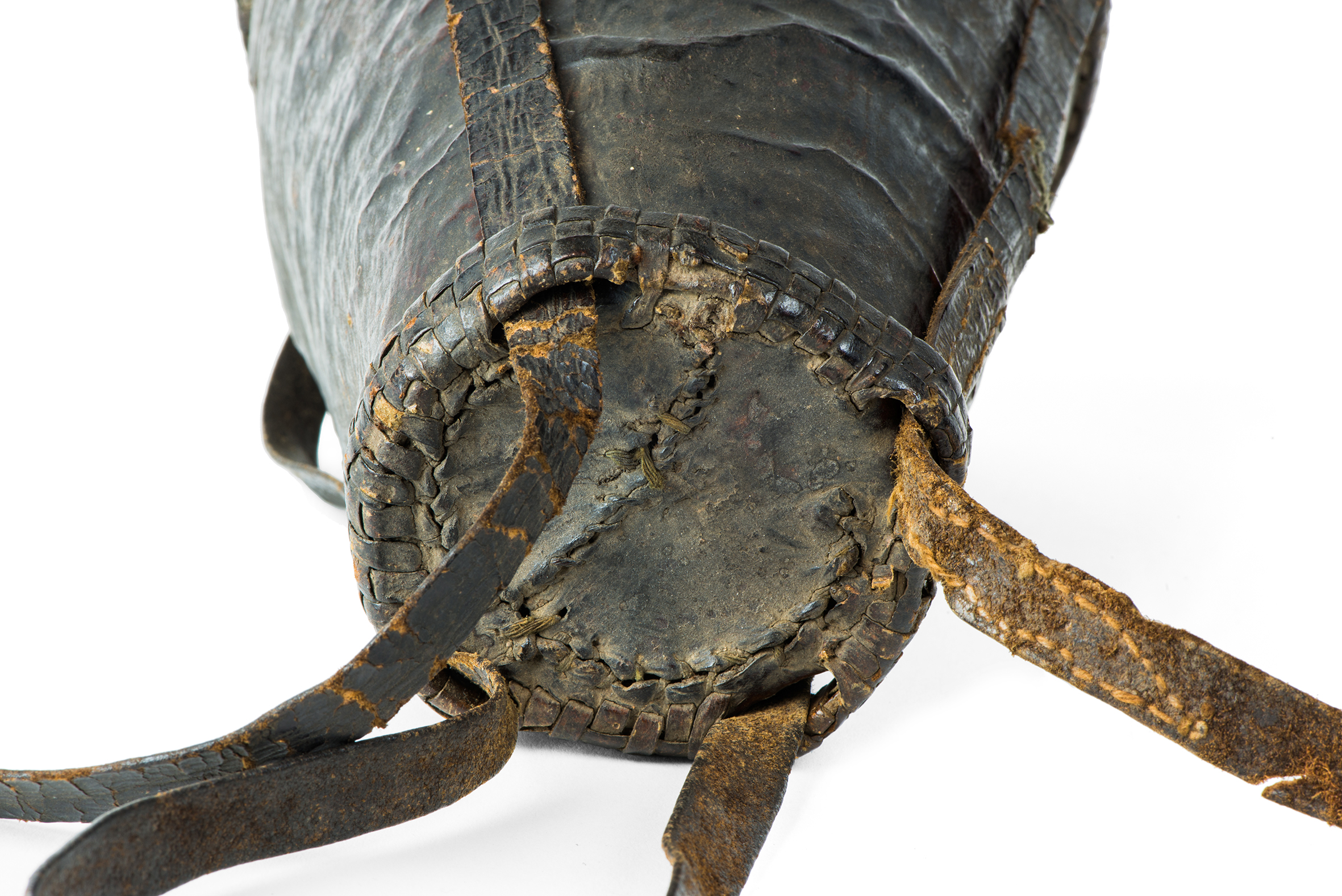 Figure 4 (a, b, c) : Protective and carry on leather case. The lid is held in place by four leather straps passing under two braided ornaments. The straps are pulled down to close the case. Photo E. Disner.

The lid of the case shows abrasion traces which match the same damages observed on the external upper part of the cup (Fig. 2 and Fig. 5). A careful examination of these traces showed that they were clear proof of attacks by woodborers or scavenger insects. Considering the damage’s position, the attack obviously occurred when the cup was in its case. Insects have widely impaired the leather and to a lesser extent the cup. 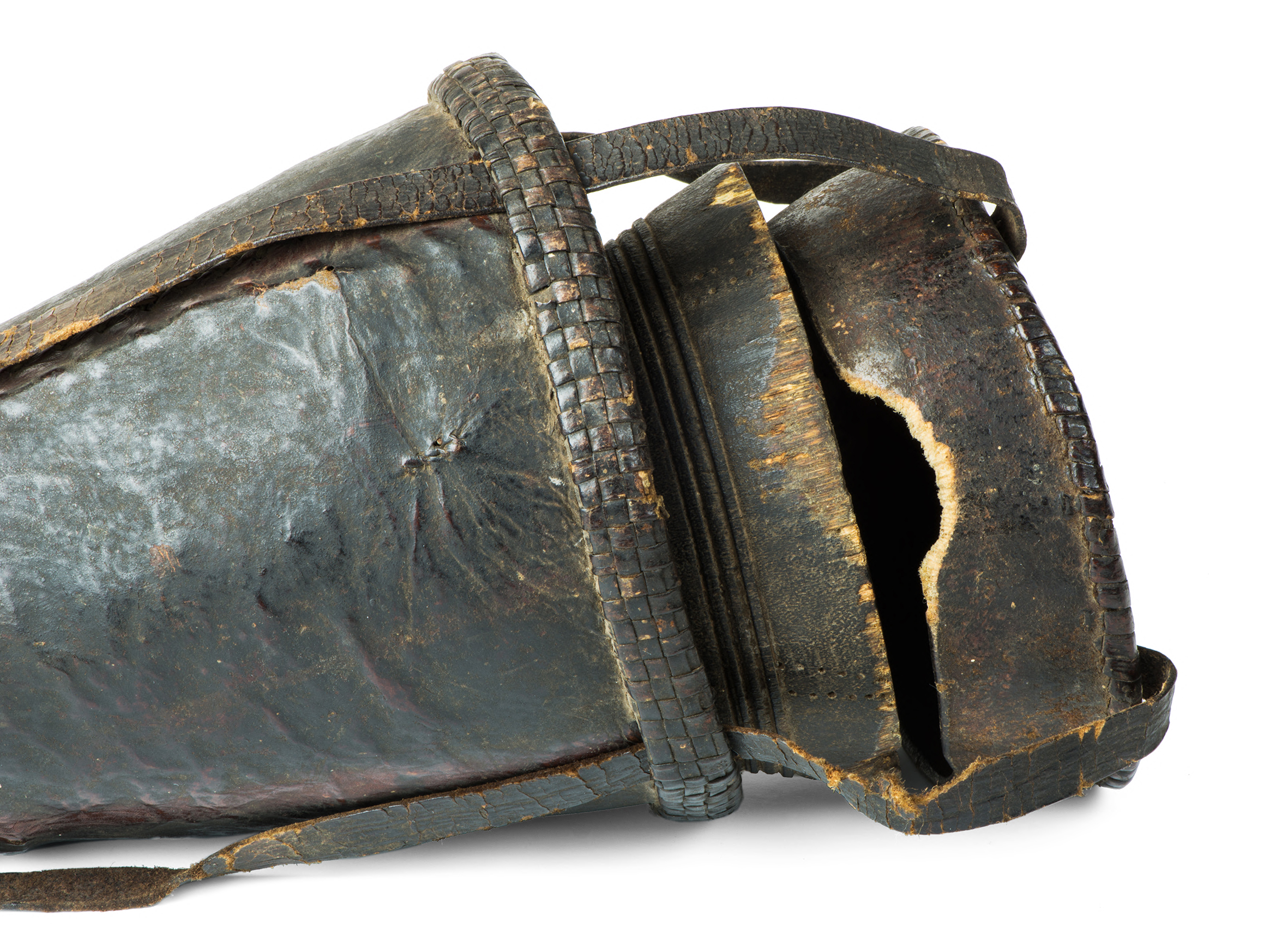 Figure 5: Damages on the case’s top matching those on the libation cup. Photo E. Disner.

Rhinoceros have been hunted by humans since the late Antiquity until today, mostly for their horn and mainly in Asia. Highly prized, they were said – without relying on any evidence – to have mythical virtues, and were used for traditional medicinal purposes. They were also used as simple ornamental objects.

Originally, rhino skin was used to make breastplates and shields while horns were carved into ritual libation cups, for their prophylactic virtues. It was believed that when poison was poured into the cup, the material of the horn would begin to stir, warning of the danger. Considered as a poison detector, horns were sculpted into intricate and refined cups and gifted to Ancient China dignitaries. The sculpture highlights the transparency of this orangey brown material, as we can see on this libation cup adorned with flowers (lotus), a recurring pattern for this type of object (Fig. 6). It is said that any good collector of the XVIth and XVIIth centuries having a curiosity cabinet must have one of these carved horns. 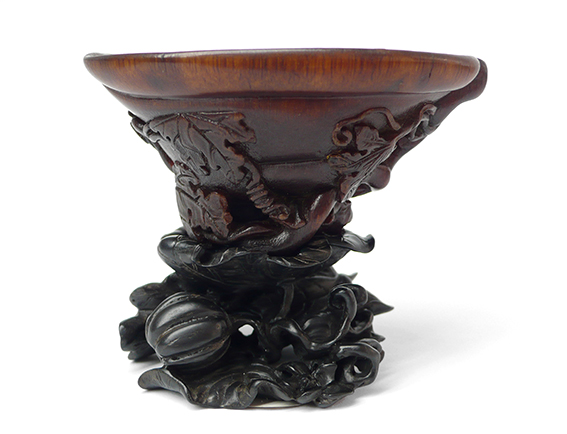 Furthermore, the rhino sexual behaviour has been inimical to its own interests. Unlike that of many species, the mating parade may last one hour, several times a day. Such vigour coupled to its suggested shape is probably the source of the aphrodisiac reputation attributed to the horn. Indeed, the consumption of shredded horn in infusion is supposed to have powerful aphrodisiac effects and medicinal virtues against cancer for example.
Up to this date, horns have no proven medicinal virtues yet these legends are the main cause of rhinoceros massacre by poaching. Because of lore, Far East still represents the largest market, having a gargantuan craze for rhino horns.

In Roman times, rhinos already became scarce in Asia. Through India, China brought the African horns, which were in the hands of the Roman trade. In the XVth century, thirty years before the Portuguese expansion, the Muslim Admiral Zheng He initiated a Chinese fleet; sixty-three ships would then explore the world through the Indian Ocean from 1405 to 1433, for seven expeditions. China bought horns directly from Africa. Traffic has lasted until today.

In Ethiopia, each important events of the Christians social life are accompanied by a consumption of fermented drinks in dedicated cups (see Guindeuil, 2014). Concerning the examined cup, the use of the rhino horn shows the owner’s prestige. Wança cups, intended to drink beer, were used by all social group in Ethiopia. Not only were they mean to travel with their owner in a wooden case (käzäna), they could also be used as a measuring tool. These cups are usually turned with a lathe, ornamented by two to four streaks near the opening and a similar pattern at the base. Most of them are made in ox horn, while the most prestigious are made in ivory or rhino horn. Less prestigious ones are made in wood or terracotta. The quality of the cup is also judged by its size and the craftsmanship.

Rhino horns, both worn by males and females, are not horns stricto sensu because they do not have a bony base like deer antlers for example. Yet, they do not resemble elephant ivory or roar tusks either. Rhino horns are only made of agglutinated keratin (a fibrillary protein found in hair, hoofs and finger nails). This special structure can be observed under magnification (Fig. 7 and Fig. 8). This compact mass of hair closely welded to each other is the defensive weapon of the rhino and serves him not only to ensure its supremacy over a harem but also on a territory. Unfortunately, the horn is also hard enough to be carved.

Unlike the ivory that is hollow, rhino horns are full. Colour can vary from a dark reddish brown to a light brown (honey) and in the present case, because of environmental conditions and age, dark brown.

The horn structure can be observed on the micrographs of the cup basement, where it has been polished by the use (Fig. 8). The apparent horn cross section shows keratin horn tubules with darker points at the centre, those are the medullar cavities. Note the brownish orange colour and the transparency which are characteristic of rhino horn.

Plastic materials are commonly used as an imitation of rhino horn (typically acetate or polyester, like for tortoise shell) but in those cases, no internal structure can be observed. 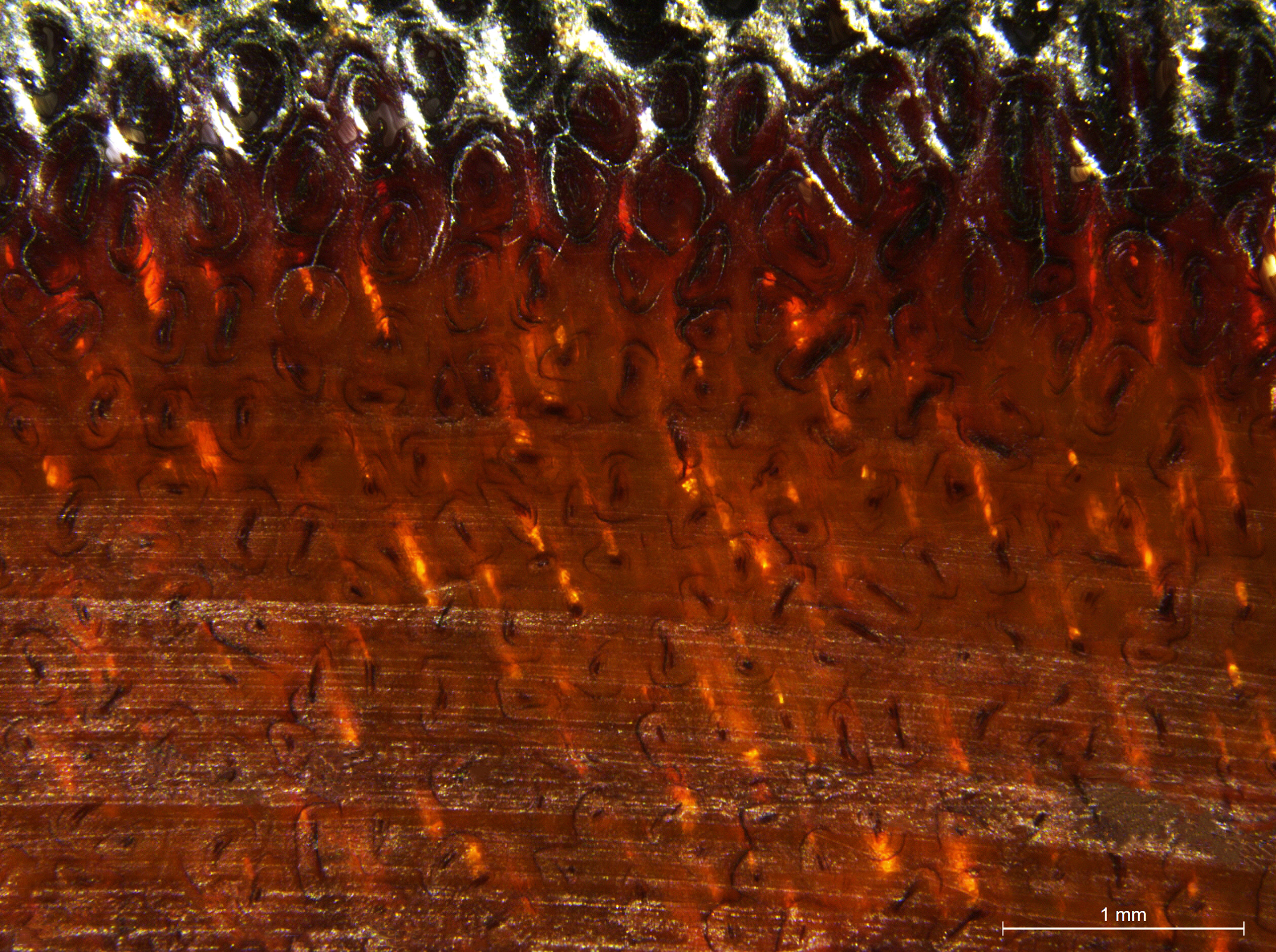 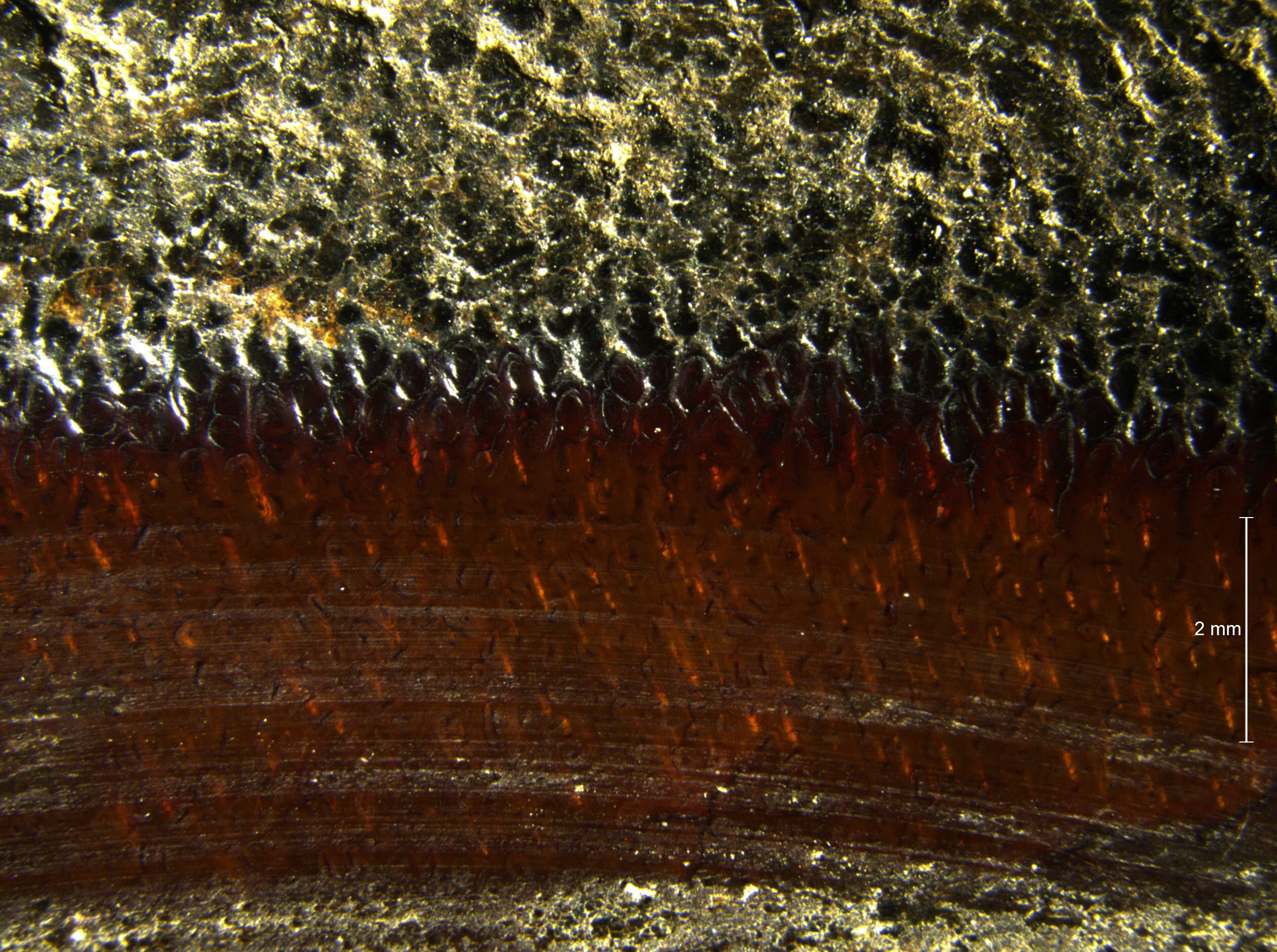 Figure 8: Micrograph of the base of the cup basement (transmitted and reflected light).The medullar cavity/channels in the center of the tubules and the characteristic transparency can be observed. The whitish slightly curved lines are traces made by the lathe. On the upper part, the structure resulting of the hair agglomeration is explicit. Micrographies F. Notari.